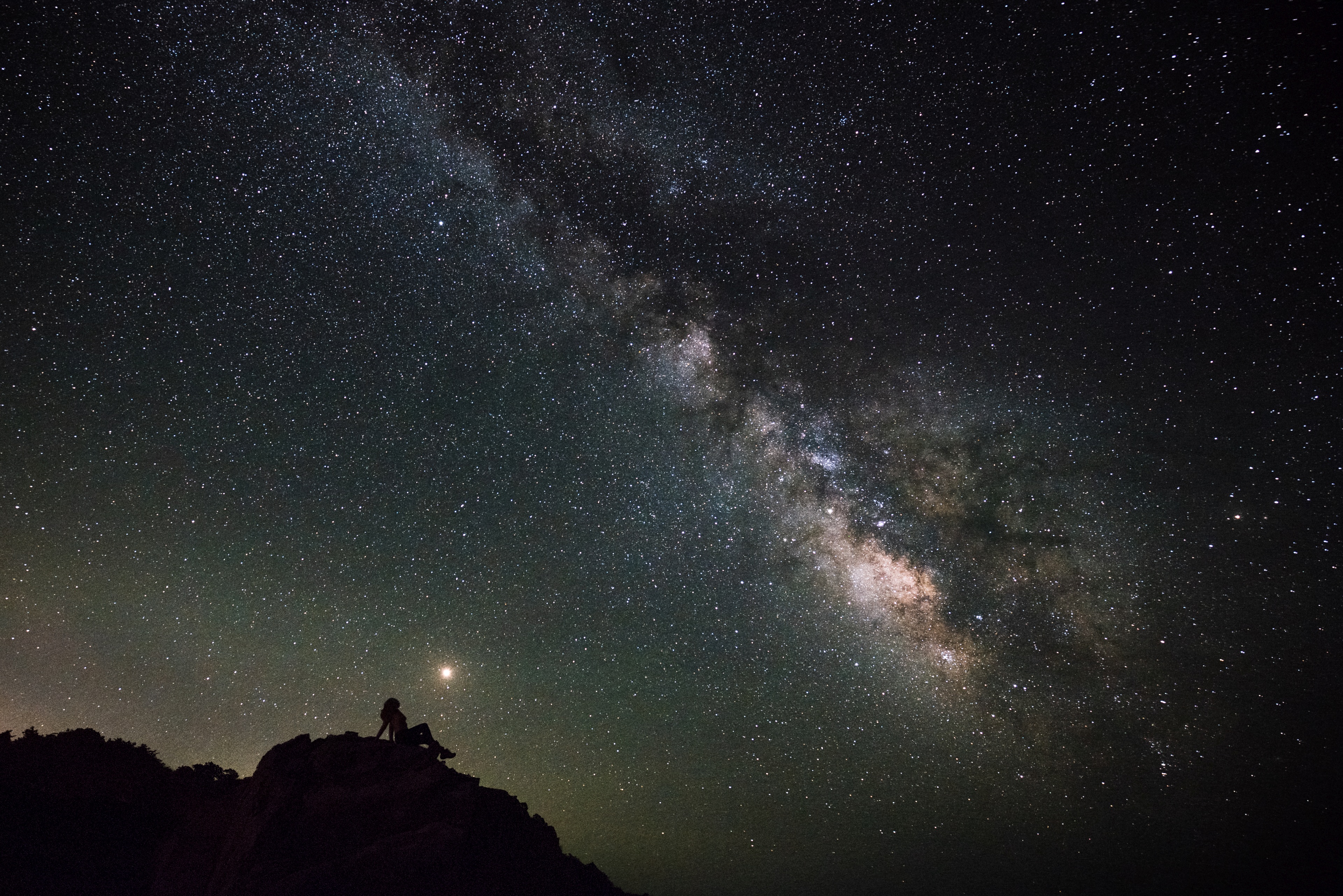 This is one of my favorite photos that I've ever taken. That big, bright light right by Liv? That's Mars. It's brighter right now than it has been since 2003. The pose was 100% Liv's idea, and it completely makes the shot. I have the best assistant and photo model girlfriend! <3 Other experiments included having Liv point up at Mars, and shining her headlamp up into the sky. Neither composition was as cool as this one!

This past weekend, I went on a camping trip to Ocean Cove, a gorgeous campground just north of Jenner, CA. It gets very dark there at night, especially when the moon is new. Just after midnight, I set up my tripod and camera on a big rock overlooking the Pacific Ocean, the Milky Way, and Mars. My girlfriend Liv perched herself on another rock in the corner of the frame. I readied my camera, took a few photos, and ended up with this: I’d like to share with you how I created this composition in five steps – please join me in this photographic journey!

I’d like to break up my process for capturing this image into five steps:

I did a few things to ensure optimal conditions for this shoot:

First, I scouted this rock for a specific spot that met the following criteria:

Upon finding a suitable spot, I set up my tripod such that I could comfortably sit on the rock and still use my camera from that sitting position. The creative part came next!

There is no way for me to tell you exactly what ordering, sizing, and positioning of elements in a photo is “the best.” This is something that you must discover for yourself. There are “rules” that you can follow, and “best practices” you can employ, but the composition of a photograph is a deeply personal artistic choice. Experiment for yourself and discover what you prefer!

In this specific case, there were several compositional elements that I knew I wanted:

With these “soft requirements” mentally noted, the rest of the composition fell into place. I sat on the rock and adjusted the tripod according to my preferences.

Anytime a person is involved in a photograph and the photo isn’t meant to be candid, the photographer must direct the human. Direction ranges from simple (“Go stand over there!”) to complex (“Raise your right arm, curl your big toes, and straighten your back! Pop those shoulders! Twirl around three times!”).

Liv had been sitting next to me up until this point in the process. At this point, I asked her to climb up onto the rock and do a few things:

Liv carefully ran off to the rock and did exactly those things (with her own personal flair, of course). The photos resulting from those poses came out well enough, but what happened next was a stroke of creative genius: She yelled out: “hang on a second, I have an idea!” She sat down on the rock and struck the pose you see in the final result. Perfection.

When directing people, sometimes you only have to make someone feel comfortable enough, then give them a chance to be creative on their own. This night was one of those times.

None of my process up to this point has had anything to do with the specific photographic hardware that I used. Only during this step does the hardware matter!

I’ve been using a Canon 5D Mark III for the past five years. The lens I chose for this shot was a Canon EF 16-35mm f/4L IS USM Lens.

Last year’s Milky Way photo was the first time where I employed the astrophotography technique of “stacking”. The basics of stacking are “take lots of pictures from the same place using the same settings, combine them, then subtract out noise.” You can read more about stacking here.

There are a few stacking-related terms you should understand before continuing:

This year, I knew I wanted to try stacking a bunch of frames again. With that goal in mind and my composition set, I snapped a few test frames and eventually settled on the following camera settings:

More Capture Details (And A Confession)

After adjusting the camera’s settings according to the above, I captured:

As you may be able to glean from the above, the final image is a composite image – it is not a single image straight out of the camera. Furthermore, the part of the photo containing Liv and the rock she’s sitting on is from a completely different exposure than any in the set of light frames.

In my opinion, composite photos that don’t alter the original landscape of a subject carry the same artistic authenticity as a single photo straight from the camera. There is lots to discuss here – perhaps for another post!

Post-processing my images is a hugely important part of photography to me. I have never shared a photo straight from the camera!

Processing the 24 images I captured consisted of a few steps itself:

A. Stacking the Stars

Using DeepSkyStacker 4.1.1, I combined the 23 images of the stars that didn’t contain Liv. In the resultant image, the stars and planets looked amazing. The rock and trees in the bottom left looked blurry due to the rotational correction applied to the individual frames by the stacking software. That was OK, because I knew that I was going to replace that part of the image with the rock and trees from The Liv Frame. I was very happy with the result.

B. Editing the Starry Image

I then brought the result from (A) into Adobe Lightroom CC and modified it to my artistic preferences. I played with the color temperature, exposure, highlights, shadows, clarity, and other parameters. The details here aren’t very important – all that’s important is that the result looks great!

After that, I took the result from (B) and The Liv Frame into Adobe Photoshop CC. In The Liv Frame, I used the Magic Wand tool set to a very low threshold to select the dark rock. I then cleaned up that selection with the Quick Mask tool plus a feathered Paintbrush. I perfected the selection of Liv with some careful usage of the Polygonal Lasso Tool. Finally, I applied a small amount of feathering (~2px) and smoothing to the selection to prevent harsh edges.

I cut out that section of the image from The Liv Frame and pasted it into a new layer of the final starry image from (B).

Anytime you combine two images, it is very likely that you will have to perform some geometric and color correction to one of the images to account for their differences. In this case, I made the following adjustments to the rock and Liv layer from the result of (C):

Last, I captioned the final image in Lightroom, and exported it to my SSD. Woohoo!

There are a number of things I learned from this year’s Milky Way capture that I’ll use next time I want to photograph the stars:

Thank you for reading my post! If you have any questions, feel free to leave a comment below.