Set the Date of VX8300 & enV Touch Photos from Filename

Before I continue explaining what this is for: If you know exactly what this utility does and you’d like a download link to the Python script, here it is:
LG_Photos_Filename_To_Date.zip

A long time ago, I used an LG VX8300 flip phone. I still maintain it’s the best flip phone I’ve ever used. After that, I used an LG enV Touch, which was also an excellent device.

Both of these phones took perfectly fine images and videos, which I still have on my hard drive years later. The problem is, as I’ve modified my PC’s hard drive setup and touched the files with various utilities, the file’s time attributes have become incorrect. Here’s an example of the file attributes from a photo I took in early 2009: As you can see, the date created, date modified, and date accessed file attributes are all incorrect. I wrote a Python script for Windows machines to modify these values based upon the file’s name.

Older LG phones take photos and videos whose filename have the following pattern:

Here’s a download link to the script I wrote. It only works on Windows. To use it, unzip it and then double click it. You must have Python and Pywin32 installed. Next, supply the directory where your images are located and press enter. Don’t put quotes around the directory.

The features of this script include:

Known bug: This script has issues with daylight savings time. You might notice that your “Date Created” attribute gets changed to a value that’s one hour before the correct time. I’ll work on that at some point, but it’s not a critical bug.

Here’s a screenshot of the file properties of the same file as above, taken after running this script: Please be careful when using this script! It modifies attributes of files on your system. I’ve used this script on my own filesystem without any issues, but I make no guarantees that it’ll work with yours. Feel free to modify the script as you see fit.t

The Best Trap, Electrohouse, and Electronic Music of March 2014

Here’s a Soundcloud playlist of all of the tracks below.

You could click on any one of these tracks and enjoy it. Listen to a few and tell me what you think!

I’ll be making one of these posts at the end of every month. Enjoy!
END_OF_DOCUMENT_TOKEN_TO_BE_REPLACED What a fun birthday celebration! That’s me in the green.

How very exciting. I turn 22 today.

A Friendly Fox has been up since November 17, 2012. That’s exactly one year and four months ago. There was a waxing crescent moon that night, and daylight lasted for 9 hours and 42 minutes that day.

I started this site after a friend encouraged me to have a place where I could write tutorials and lists and helpful tech hints.

Since then, people have pointed their browsers at this site 117,980 times, and you friendly people have posted 385 comments to the site. That’s about 243.25 views and 0.793 comments per day. I hope those numbers keeps increasing as I keep writing posts. Even more, I hope that my posts have been informative and helpful to all of you.

Thank you for helping A Friendly Fox be successful!

Happy Saint Patrick’s Day, everyone! I hope you all enjoy the rest of your week.

20 Essential Windows Applications You Should Install

There are a few Windows applications I use that I couldn’t live without. I install many of these programs on my personal Windows computers immediately upon a fresh install of the OS, and I urge you to do the same. Here is an alphabetical list of 20 Windows applications that I find incredibly useful.

END_OF_DOCUMENT_TOKEN_TO_BE_REPLACED

With Instagram 5.0 (Google Play Store, Apple App Store), released earlier today, you can now send photos to specific people with a feature called “Instagram Direct.” It’s obvious that Instagram developed this feature to compete with Snapchat. I’d like to weigh the pros and cons of Instagram Direct, and hopefully steer you away from using Snapchat when you want to share a normal picture with a friend. I also want to discuss Instagram as a photo sharing platform by itself and when compared to email or MMS, the old standards.

Instagram Direct is going to disrupt the “sending pictures to your friends” space, just like Snapchat did.

END_OF_DOCUMENT_TOKEN_TO_BE_REPLACED

Build an Awesome Custom PC on Any Budget I’ve been building custom PCs for nearly 10 years now, and I greatly enjoy helping others build their own computers. Friends, acquaintances, and strangers often approach me, asking for advice on their next custom PC build. Every time I part out a new custom PC for someone, something I have done hundreds of times in the past, I will update this post. I hope it comes in handy when you’re building a PC of your own!

Please feel free to contact me if you’d like me to design a custom PC for you!

END_OF_DOCUMENT_TOKEN_TO_BE_REPLACED

Users of Google’s Android operating system have access to over 1,000,000 apps on the Google Play Store. With such a huge catalog of applications, it can be difficult for new and veteran Android users alike to discover applications outside of Facebook and Snapchat. I would like to share with you a few of my favorite apps, and simultaneously answer a question I receive from many new Android users: “Which Android apps should I install?”

END_OF_DOCUMENT_TOKEN_TO_BE_REPLACED

17 Awesome Google Chrome Extensions You Should Use

Chrome is the most-used Internet browser in the world, and for good reasons – it’s fast, powerful, and well-designed. Users can also install extensions for Chrome via the Chrome Web Store, which further expand its functionality. I’ve compiled a list of 16 of my favorite Google Chrome extensions, most of which are integral to my browsing experience.

END_OF_DOCUMENT_TOKEN_TO_BE_REPLACED I like Apple. Their hardware, which epitomizes modern design, is powerful and revolutionary. Their sleek software embodies a near-perfect user experience for a majority of their audience. When Apple revealed iOS 7, their latest mobile OS, I was very excited for the radical redesign. But after using the new operating system for just a couple of seconds, I discovered that Apple had made a huge mistake with their design of iOS 7: Navigation buttons – arguably one of the most important design elements of a touch-based interface – are completely borderless.

END_OF_DOCUMENT_TOKEN_TO_BE_REPLACED 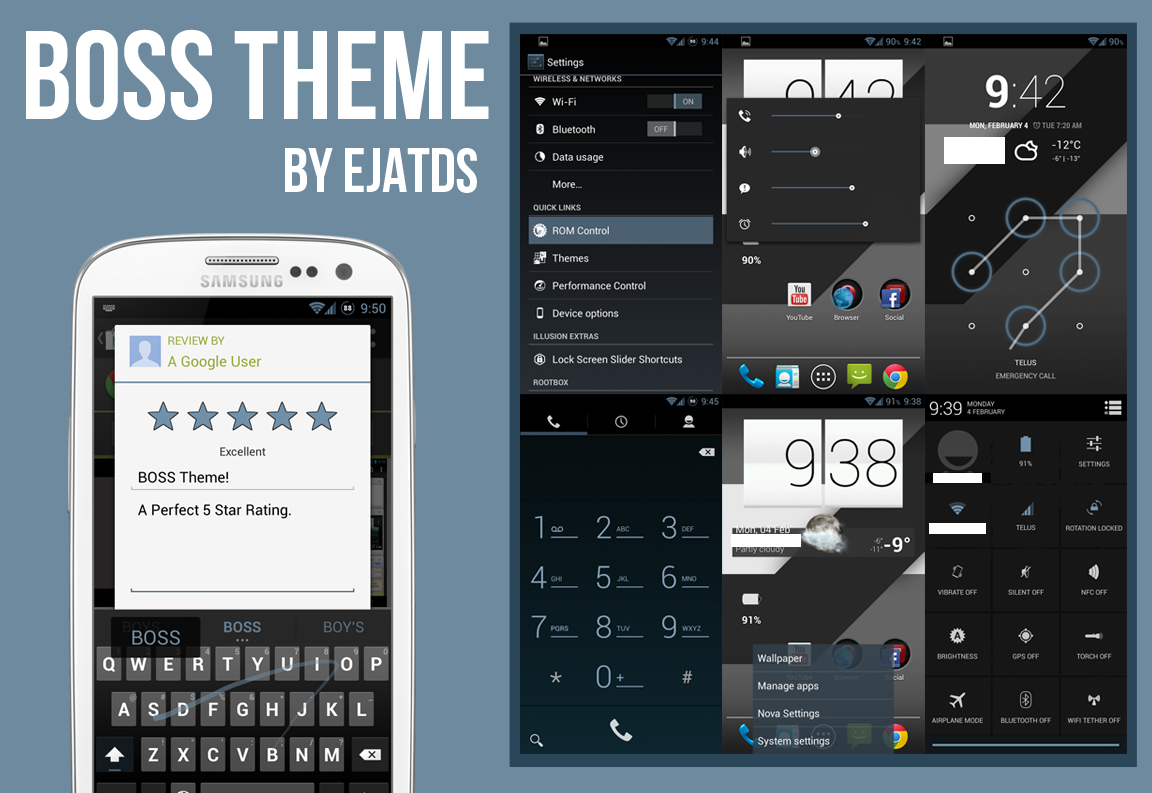 Android custom ROMs such as CyanogenMod 10.1 and 10.2, AOKP, and ParanoidAndroid enable users to apply a custom theme or skin to their device. These themes modify graphics such as the status bar, various icons, selection boxes, and list backgrounds. They come from multiple sources, including the Google Play Store and the XDA Developers forums. I have compiled an alphabetical list of 24 beautiful themes for all CM Theme Chooser ROMs. Enjoy!